In My Mailbox is a weekly meme hosted by Kristi at The Story Siren :D 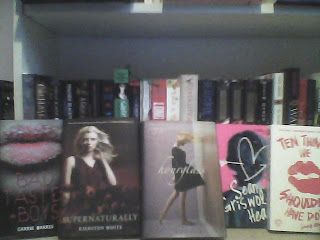 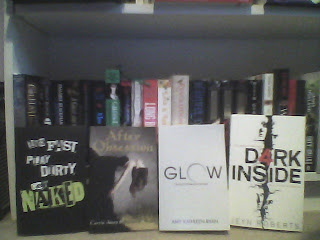 Bought:
Bad Taste in Boys by Carrie Harris (Made of awesome. So funny, so nerdy, so good.)
Supernaturally by Kiersten White (Reading this now. I missed Evie so much!)
Hourglass by Myra McEntire (So beautiful. The cover is kinda soft too. Love it. Plus the hardback bit underneath it is grey and SO PRETTY.)
Sean Griswold's Head by Lindsey Leavitt
Ten Things We Shouldn't Have Done (I much prefer the US cover, but the UK one is about £6 cheaper so... ;p)
Review:
Naked by Kevin Brooks (I saw the word punk and was like HELL YEAH. Thanks to Puffin :D)
After Obsession by Carrie Jones & Steven E. Wedel (I haven't read the Need series, but this looks really interesting! Plus it's really pretty. Thanks to Bloomsbury.)
Glow by Amy Kathleen Ryan (Excited for this one! Sounds a bit like Across the Universe which I adored!)
Dark Inside by Jeyn Roberts (Not heard of this before but it looks fantastic! Thanks to Macmillan for the last 2! :D) 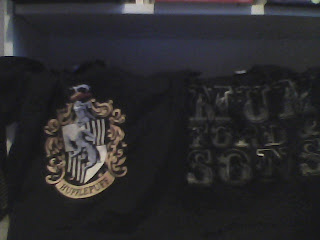 So these aren't really that bookish, but for those of you who don't know, it was my birthday this Thursday, and my mum got me these awesome t-shirts! :D Mumford & Sons are, like, my favourite band, and I love showing off my Hufflepuff pride! ;D She also got me the first 2 seasons of Angel so I'm looking forward to getting stuck into that :D
What did you get? :D
Posted by Cicely at 16:38