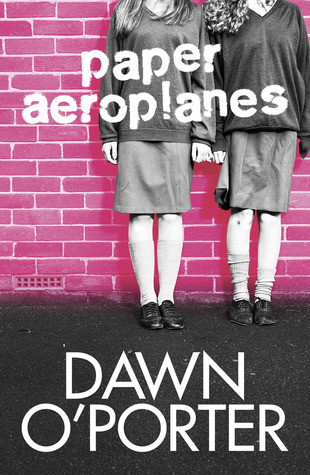 It's the mid-1990s, and fifteen year-old Guernsey schoolgirls, Renée and Flo, are not really meant to be friends. Thoughtful, introspective and studious Flo couldn't be more different to ambitious, extroverted and sexually curious Renée. But Renée and Flo are united by loneliness and their dysfunctional families, and an intense bond is formed. Although there are obstacles to their friendship (namely Flo's jealous ex-best friend and Renée's growing infatuation with Flo's brother), fifteen is an age where anything can happen, where life stretches out before you, and when every betrayal feels like the end of the world. For Renée and Flo it is the time of their lives.With graphic content and some scenes of a sexual nature, PAPER AEROPLANES is a gritty, poignant, often laugh-out-loud funny and powerful novel. It is an unforgettable snapshot of small-town adolescence and the heart-stopping power of female friendship.

I was a tiny bit cautious when it came to reading Paper Aeroplanes because it's a book written by a person who's been on the telly, and as such I was curious as the whether she'd just written it to make a bit of extra cash, but I didn't need to be worried at all because it was not the book I expected it to be, and I really liked it. And after having heard Dawn talk about celebrities and celebs who write books, I feel bad about being a bit judgy at first.

Paper Aeroplanes is ultimately the story of a friendship between two girls - Renee and Flo. When the book starts, the two of them haven't actually become friends yet, so I guess it's really the story of the beginning of their friendship, and you know me, I LOVE books about friendship. I really enjoyed seeing their friendship grow and develop, especially as they're two such different people. You get both of their points of view in the book, which was nice as well because you really do get to feel like you really know both of these girls and their lives. I do feel that, as a consequence of having the two main characters being so well developed, and that the whole book is really just about these two girls and their friendship, that a lot of the side characters felt a bit two dimensional? But maybe this was just me.

It was kind of more serious than I'd thought it would be. Which isn't a bad thing, it just kind of took me by surprise. Both Renee and Flo have pretty miserable home lives, and Flo also has a problem with her 'best friend' Sally who is probably one of the worst people on the planet. Ever. She's so horrid. And there are also a lot of issues like grief and sex and being a girl stuff which I really appreciated. I don't think every book should be explicit about things like periods and sex and body hair and whatever but sometimes it is appropriate in the story and it is so comforting to read a book which does talk about the things that nobody wants to talk about. It's like, 'Oh! That stuff happens to other people too! Awesome. I'm not a freak of nature', which is always nice. And it served the story a lot, too.

I think that there were parts of it which were uncomfortable to read, but only because it felt so real. Like, it felt a bit like how it would feel to read someones diary, maybe where they're very frank about their feelings and what they're doing even though it's not written like a diary or anything. I liked this aspect to it because it felt really right for the book, getting this sort of no holds barred look into these two teenage girls lives, but I think in any other kind of book it would have been a bit off. I am looking forward to reading Goose though, and seeing to what happens to these two girls. Over the course of the book I came to care about them and their friendship a lot (which I guess is kind of to be expected, really...).

So yeah! Paper Aeroplanes was a really good read, which was kind of heavier than I'd expected, but was still funny and fun to read. If you like books about friendship or shows like My Mad Fat Diary (drawing the comparison mainly because the 90s and explict-y content) then this will probably definitely be up your alley!
Posted by Cicely at 18:51