I may have inappropriately  titled this seeing as I'm not really going to talk that much about Romance, but whatever, it's Valentine's Day, so let's roll with it.

But seeing as it is Valentine's Day, and most people are going to be talking about their favourite couples, or romances or whatever (which is awesome - yay relationships!), but I thought that I'd do something a bit different and make a list of my favourite non-romantic relationships in books. So, in no particular order, my ten favourite sibling, bromances, parent-child, whatever relationships!


1. Harry Potter and Ronald Weasley/Hermione Granger from Harry Potter
Really, how could I make a list about my favourite non-romantic relationships without mentioning the golden trio. And yes, I know that there's been tension between Ron and Hermione since, like, the dawn of time, but I mean Harry's relationship with them both. I love Harry and Ron's friendship because it always has ups and downs, but they always make up in the end. And I also love Harry and Hermione because there isn't a great amount of romantic tension between them, and I think that there needs to be more boy/girl friendships out there because belief it or not you can be friends with someone of the opposite gender and not want to get in their pants (one of my grievances with the age old love triangle). 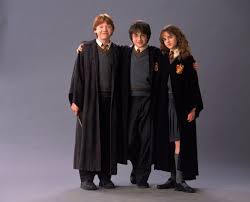 2. Fred and George Weasley from Harry Potter
Last one from Harry Potter, I promise (though because of the huge cast of the books there are plenty I could choose from *looks at Dean and Seamus*). But really, how could I not include these brilliant, hilarious wonderful twins who love each other so much and who had to be torn apart so tragically. I'm going to stop there, before I start crying.

3. Nick and Alan from The Demon's Lexicon
Now please bare in mind, I've only read the first book so I have no idea what really goes on between them in the next two, but what I have read of it, I've loved. There was a lot of turbulence, and I'm not sure how they feel about each other because of certain things (read the book guys, it's great), but I'm 90% certain that there is some underlying brotherly love, or at least obligation there. I really need to read the second book.

4. Cammie, Bex, Liz and Macey from the Gallagher Girls books
Ugh, I just love these girls so freaking much. They are pretty much the perfect example of the kind of friendships I want to see more of. Especially Bex and Cammie. They've had a lot of difficult times and have fallen out every now and again, but at the end of the day they stick together and would do anything to keep each other safe.

5. Crowley and Aziraphale from Good Omens
You guys. You. Guys. If you have never read Good Omens then I highly recommend that you stop everything that you're doing and read it now because it's the best book ever. And these two. This angel and demon who go about trying to stop the apocalypse together. I just love them.

6. Seraphina and Orma from Seraphina
The only sort of parental relationship on this list, sadly. (I would've put Harry/Dumbledore or something, but enough with the Potter). When I finished Seraphina, it was the main thing I'd taken away from it - apart from the beautiful writing and amazing main character and awesome setting and mythology.

7. Jane and Lizzie from Pride and Prejudice
How could I not include the Bennett sisters?! Especially with the Lizzie Bennett Diaries nearing an end (and if I was going by those standards, then I definitely would've included Lydia with Jane and Lizzie) but as far as the book is concerned, then Lizzie and Jane are my main girls. It's so sweet how they'll stay up talking about boys and how well they know each other and how much they want to see the other one happy. I just love P&P. It's so good.

8. Mel and Cathy from Team Human
I feel like I had to include these two! Their friendship was a lot of what made Team Human for me because it was the central relationship of the book, and I loved the emotional journey they went on. The understanding that they came to at the end was also lovely, because it just shows that incredibly different people can make the best of friends, and that even though you think you might know what's best for them, they might not want the same as you. (Also, Kit and his mum were awesome)

10. Sherlock Holmes and John Watson from the Sherlock Holmes canon
I can't believe I nearly forgot about these two! The ultimate Victorian bromance (and yes, I know everyone secretly thinks that they were gay, but for the sake of this argument we're calling it a bromance). I don't really know what else to say. They're just great. And I love them. And I need Sherlock back on my telly.

There are many, many more, but I have the memory of a goldfish and so can't really remember them that much (whoops), but I hope you've enjoyed this list! I tried to keep it quite gender balanced, too, because I didn't just want to write about bromances. What are some of your favourite fictional non-romantic relationships?
Posted by Cicely at 17:13