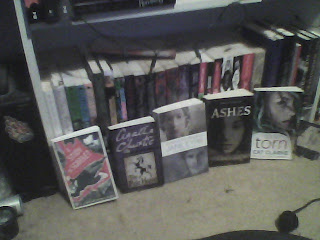 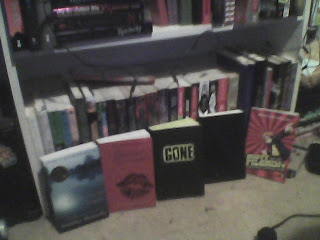 This is the last 3 weeks of books.
Gifts:
A Study in Scarlet by Arthur Conan Doyle (if you don't follow me on Twitter, I'm a massive fan of Sherlock, and my mum thought it was high time I read the books, so... I also have Jeremy Brett's version waiting for me to watch!)
Jane Eyre by Charlotte Bronte (again, I've been wanting to read this for ages, and my mum never buys me YA for xmas/birthdays, so she bought me some classics I wanted instead)
The Pale Horse by Agatha Christie (I've been pretty big on mysteries lately.)
Bought:
Torn by Cat Clarke (AWESOME.)
Ashes by Ilsa J. Bick (Love me some post-apocalyptic zombies)
A Gathering Light/A Northern Light by Jennifer Donnelly
Shadow Kiss by Richelle Mead! (Finally! Dimitri!)
Gone by Micheal Grant (I've been meaning to start this series for ages)
Knife by R. J. Anderson (the one that looks like it doesn't have a cover. But it does, it's just really shiny. But it's also really pretty, so!)
Scott Pilgrim's Precious Little Life by Bryan Lee O'Malley (One of the graphic
novel series I've been meaning to read since I saw the film 2 years ago...)
What did you get in your mailbox? :)
Posted by Cicely at 19:00