Hello guys! Today I'm finishing up the blog tour for Dave Cousin's wonderful book, 15 Days Without A Head! Today he's going to talk us through some of the locations in the book and how he came up with the settings :) Please welcome Dave! :) 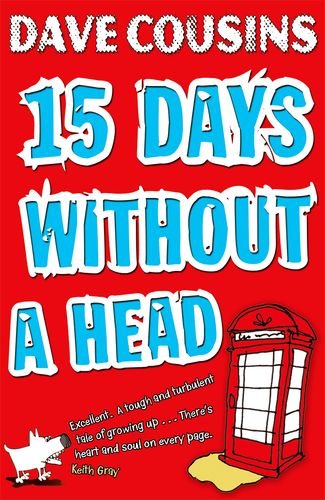 The setting of a story can have a huge impact on the tone of a book. Imagine how different Hogwarts would have felt, had it been modelled on a comprehensive school in Birmingham, for instance!
15 Days Without a Head is set in Hardacre, a fictional satellite town somewhere in the south of England – although I’d like readers to feel it could be anywhere. Two of my favourite authors, Robert Westall and Robert Cormier, created the fictional towns of Garmouth and Monument respectively. Using these places as the setting for a number of their books, gave the towns a history and made them feel real. I always get a buzz of recognition when somebody in a Robert Westall book walks past the Fish Quay Sands, where Chas and Cem hang out in the Machine Gunners. I’d like to be able to do the same with Hardacre, which has already cropped up in the new book I’m working on. There’s even a reference to The Heights you might spot, if it survives the edit.
I didn’t simply create Hardacre to emulate my heroes, however. Writing about real locations can cause problems. Apart from the obvious constraints of real geography, places evolve, the architecture changes, sometimes dramatically – and unless you know an area very well, there’s a danger you’ll get the details wrong. The locations in 15 Days Without a Head tend to be a combination of real places and invention. I can always see an environment in my head as I write, but later on I’ll often try to find a real place on which to base some of the details: what you can hear and smell – what it feels like to stand there.
The location I did need to research a little more thoroughly, was the canal that features in the second half of the book. When I wrote the original draft of 15 Days, my walk to work took me along part of the towpath of the Grand Union Canal in Hertfordshire. The canal in the book isn’t based on any particular stretch – I’ve taken a bridge from here, a view from there, a lock from further along. There was an incident towards the end of the book though, where I needed to check precise sightlines, angles and positions. That’s the one scene where I had to find an actual location, and take photos and video, to make sure that everything would be accurate in the story.
The telephone box shown on the cover is probably the most important location in the book. It is an unpleasant environment, somewhere Laurence feels exposed and vulnerable, but it is also the place that he believes will help him find a means of escape and resolution for his family. At lot happens to Laurence while he is inside the box. Despite the fact it is so small and, at first glance, ordinary, it provided a wide variety of opportunities in which to move the story along.
The subliminal elements used to create atmosphere in a scene can be interesting and fun to play with. The way that a film-maker will use colour palettes and lighting for different locations and mood, dressing the set, even the actors appropriately. You can do similar things in a book with careful choice of adjectives, similes and metaphors. Heat plays an important role in 15 Days Without a Head, compounding Laurence’s sense of being trapped and under surveillance.
From the urban sprawl of Hardacre to the confined space of the telephone box, the locations in 15 Days Without a Head affect and inform the reader’s experience and perception of the story. Thanks for taking the time to let me show you around.
Thank you so much Dave! :)
Posted by Cicely at 15:51