Hi Guys! The lovely Keris Stainton, author of two of my favourite books I've read this year, Della Says OMG and Jessie <3 NYC, has offered to do an interview with me! Now, it is my first author interview, so please bear with me, and I know it's long... But I really had fin doing it, and I hope you enjoy! :D (and I hope my Q's are okay! My friend on Twitter @bookwormfp helped out a lot with them...) 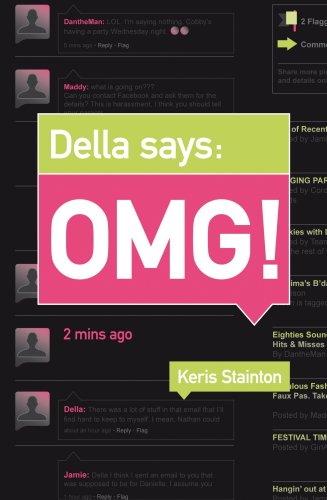 CLB: Can you try and describe Jessie in a sentence?


KS: Can I cheat and nick the line off the cover? Jessie and Finn would be perfect together, but in a city of 8 million people, will they ever find each other?

CLB: Are there any songs that really inspired you to write Jessie or Della, or that you just listened to a lot while writing them?

KS: Yes! Finn's storyline was inspired by a song called If It Kills Me by Jason Mraz. In the beginning it seems like he's just telling a girl how he feels about her, but then there's a line: "We get along much better than you and your boyfriend." I loved the idea that a boy was in love with his friend's girlfriend and also telling himself that the friend isn't really right for her anyway, like he's doing her a favour!

CLB: Aww, that's so sweet ;) I adore Finn! It's obvious from reading Jessie that you adore NYC. Where do you think this love come from? And how many times did you go to NYC while writing Jessie (if any)?

KS: Oh I'm obsessed with the place. I'm not entirely sure where it came from. American TV probably - Sesame Street, The Cosby Show, Fame. (You know the bit in Jessie where her parents laugh at her about how she used to pretend she lived in New York? That is in no way based on me... *whistles innocently*) I didn't go to New York at all while writing Jessie, which was SO HARD. Not only did writing about it make me yearn for it, I felt like I had to go! What more valid reason do you need than book research?! But I just couldn't afford it. I have been five times though, so I had plenty of memories to draw on. 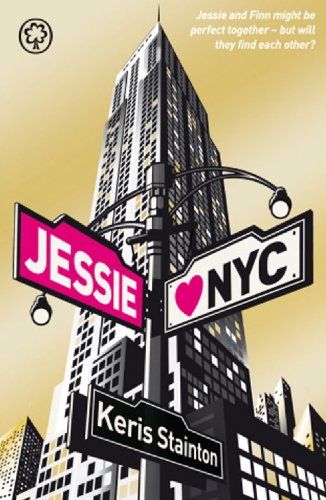 CLB: Haha, that must've been really hard! But I'm desperate to go! Especially after reading Jessie. You're book covers are awesome! Do you ever get to have any input into the cover designs? And what was it like seeing Jessie's cover for the first time, in all of it's beautiful shiny shiny glory?

Thank you! Yes, actually, my editor's been really great about that. With Della it was my idea to have the IM chat in the background and then I dreamt the Jessie cover (and the title, for that matter). I sent some mock-ups to my editor and they really liked them so went from there. I cried when I saw the finished cover. It's so MUCH better than the one in my dream. I absolutely love it.

CLB: Yay! It's so beautiful! :D Have you got any other YA novels in the works? (please say yes!) If so, can you tell us anything about it?

KS: I have, but I can't say anything about them yet, I'm afraid. Soon, I hope! And thank you so much for wanting more!

CLB: Yay! This means there may be more Keris books! *happy dances while crossing fingers* You're very, very prominent on Twitter, so what's it like being able to interact with your readers so casually and on a day-to-day basis?

KS: Oh it's completely amazing. I love Twitter so much (you may have noticed...). I wish it had been around when I was a teenager (but the internet hadn't been invented... I'm old). I love getting tweets from readers and I love being able to tweet the authors of books I've enjoyed. When I think how if you wanted to tell an author you liked their book you had to write to them - on paper! - care of their publisher... it's like a whole new world!

CLB: How do you deal with negative criticism? (And positive feedback!)

KS: Ha! I don't deal very well with either, to be honest. I tend to dismiss positive things and then obsess over anything negative. I really worried about bad reviews before Della came out, but I've actually been okay about them. The only thing I can't stand is factual errors. I had a couple of reviews that misunderstood the ending of the book (and both included a huge spoiler) and it's so hard for me not to respond, but I know that would be a big mistake. Huge.


CLB: If you could have any celebrity read your book, who would it be?
KS: Ooh, good question. Nora Ephron so she could turn it into a film. (It's about time she made a teen movie, I think!)
CLB: If you became a worldwide famous author, (like, JKR big) what would be the first thing you'd do?
KS: Wow. Imagine that. *imagines* *goes a bit faint* There's a house I've been coveting for a while, but it's well out of my price range, so I'd probably buy that. And then I'd do like a supermarket sweep type of thing, but in a book shop. And then I'd go to New York. Sorry, I know you only asked about the first thing - it's so easy to get carried away!
CLB:  Tragedy or comedy? (random, I know, but I just wanted to see which people actually liked more. Defo a comedy girl myself ;p)

KS: Buffy. Although I LOVE Nathan Fillion. And I still haven't finished watching Buffy. I got as far as Hush, which frightened me out of my wits, and I haven't picked it up again. It's on my list of things to do this year. In fact, I'm going to order a box set right now.
CLB: Zombies or Unicorns?
KS: Unicorns, definitely. Zombies are just... *shudders* I'm such a wuss, I know.
Thanks so much for the fabulous questions!
Keris x
Thank YOU so much Keris, for the wonderful answers! So, if my reviews for both Jessie and Della hadn't already made you want the books, I'm really hoping this will! Trust me, they're brilliant! Thanks again Keris :D
Posted by Cicely at 16:08