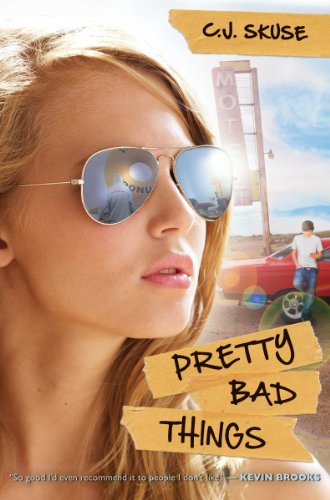 Paisley and Beau are boldface names again. Last time, paparazzi called them the "Wonder Twins," two kids found alone but alive in the woods of exotic New Jersey. Three days after their mom's death -- and before their dad's criminal misdeeds.

Flash-forward to now: Their so-called lives? Suck out loud: Hating on their cougarized, Botoxic grandma, they're totally clueless about the location of ex-con Daddy. Till they discover a stash of old letters. That's when they decide to jack the Pontiac and hit the road. Holding up donut shops in Sin City might seem extreme, but if they can just get their pretty bad faces back on TV -- or TMZ -- they might wrap up their whole gaga saga with an Oprah-worthy reunion already!

Pretty Bad Things was a bit of a romp if ever I saw one! Or rather, read one... It follows the story of the Wonder Twins, Paisley and Beau as they try to scout out there homeless dad in Las Vegas, and it was such a ride! Just like C.J's second book, Rockoholic, it was funny, exciting and thoroughly enjoyable.

I really liked the characters, though I can see why Paisley would put some people off. She has a very strong personality, and has quite a filthy mouth, so if swearing is a problem for you, don't read this book. But I enjoyed her strong personality, and I thought she was a bit of a BA. Plus, she wasn't bad or anything, she was just a bit messed up and wanted to find her dad! Beau, on the other hand, was certainly not as tough, he was kinda adorable. And he wasn't a wuss for not wanting to rob anyone! He was just sensible. Plus at the end he was so bad ass.

I also really enjoyed the robberies. Like, not the fact that they were robbing someone, of course, but just how they did it and why. A lot of people said that they didn't think the robberies were realistic enough, but I don't really think they were meant to be all that realistic... I just liked how they weren't doing it for money or anything, just to find their dad, to let him know they love him. But I do think it was an absolutely crazy thing to do and that it was not right to shove a loaded gun in someone's face just to get on the news..

Pretty Bad Things is a great book for older teens that will have people laughing and feeling for the characters, romping about Las Vegas for their dad. Only downside is that Beau hadn't heard the song Everlong before! ;p 4 stars :)
Posted by Cicely at 16:29