And on the Sixth Day, There Was News

First off, Marissa Meyer, author of the brilliant Cinder and Scarlet, will be making a brief stop in the UK in a week and a bit! How exciting is that! She'll be a doing a talk/Q&A/signing at Waterstone's Bromley on the 26th March, 6:00pm. I'm really upset that I won't be able to go to this one, actually. I would've loved to meet her, but even if you can't make it, she'll hopefully come back to the UK soon! And also, you can phone an order for a signed copy from the shop if you're desperate :) 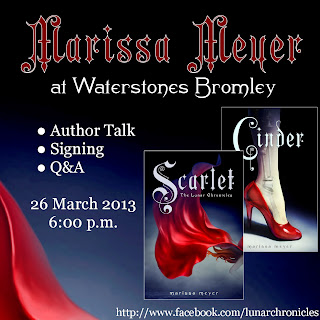 Also, Laini Taylor of Daughter of Smoke and Bone and fame is hosting a trailer competition for its sequel, Days of Blood and Starlight - in which the winning entry will win $1000! Here's  the video which explains it all. :)

And this last this is less news and more me asking for help. Apparently Google Reader is shutting down, and for a blogger I know relatively little about the internet and the technological stuff, so if anyone wants to help me a)understand what the hell's going on and b)how to get a new platform for people to follow me and what not, it would be much welcomed!

That's all for today, I think!