This post is perhaps a tad late, but last weekend was the excellent YALC, and it was such a good experience this year that I have to write about it! YALC - the Young Adult Literature Convention that is also a part of the larger LFCC - is in it's second year, and they really improved upon the first one. Of course I enjoyed the first one a lot last year (you can see that post here if you really want to), but it was better organised and less crowded this year which made it a much more smooth and much less stressful experience! It also helped that I wasn't carrying a ridiculous amount of books around with me like I did last year. 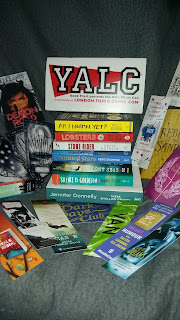 (Books and some of the swag that I acquired! The books are Am I Normal Yet? by Holly Bourne, Lobsters by Lucy Ivison and Tom Ellen, Stone Rider by David Hofmeyer, Counting Stars by Keris Stainton, The Accident Season by Moira Fowley-Doyle, Silence is Goldfish by Annabel Pitcher and These Shallow Graves by Jennifer Donnelly!) 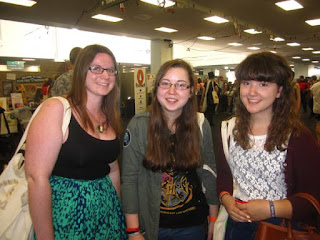 I can't really remember much of what I did at YALC because my memory is a bit shit and I didn't write anything down, but I shall try and recap things as best I can!

Bella and I met up at the station on the Saturday and made the journey to Kensington Olympia, the new location for LFCC and YALC which seemed much more spacious because it was spread out over floors instead of all out in the same area. The YALC space was up on the second floor which had carpet and EVERYTHING so that was pleasant, and it was also a lot less busy than the main floor of LFCC. When we did eventually make it down to look at the stalls and shop around I was shocked by how much quieter (and less pungent) the YALC floor was. Anyway, I went to a few panels on the Saturday as there weren't any signings that I really wanted to go to, as well as going to the Hunger Games quiz at the end of the day. The Being a Girl panel (the panelists were Holly Smale, Malorie Blackman, Hayley Long, Laura Dockrill and it was chaired by Anna James) was probably my favourite, mainly because discussions about feminism in books and YA especially is always interesting to listen to, and there were some really great points made. There was also Carrie Hope Fletcher's panel (Samantha Shannon, Malorie Blackman and Holly Smale were on this panel as well) which was fun. It was mainly a discussion of why they wanted to be writers and talking about writing which was fun enough. We also just spent a lot of time pottering about looking at the publisher stands (which were great!) and chatting to other bloggers etc. The Hunger Games quiz was fun but I have a deathly fear of audience participation so I spent most of it constantly on edge that Caesar Flickerman was going to try and talk to me.

Like last year, the Sunday was probably my favourite day, even if I was quite tired and I accidentally slept in missing all but the last 10 minutes of the Blogger Brunch that morning. I still made it in time to pick up a goodie bag though, which had Jennifer Donnelly's new historical YA in it that I am DYING to read. We also got a 20% off voucher at the Waterstones at YALC which is where I picked up Am I Normal Yet?, Lobsters and The Accident Season for the signings that day. I also went to the Bringing Sexy Back panel (Non Pratt, Lucy Ivison, Tom Ellen, Louise O'Neill and James Dawson dressed as naked Danerys Targaryan complete with modesty dragons - one of which I'm pretty sure was Toothless. IS NOTHING SACRED, JAMES?) which was a lot of fun, as one would expect with that line up. As well as that, I went to the Fantasy panel (Ben Aaronvitch, Melinda Salisbury, Sally Green, Frances Hardinge and J P Smythe) which was interesting, but I was also sitting quite far back so couldn't really hear that much of it. It was a lovely day and I enjoyed the panels that I went to and the signings that I went to!

I can't really think of anything negative about this years YALC personally. I had a great weekend, I got to see bookish people, it felt a lot smoother than last year, I got books and I feel more passionate about books and the bookish community than I have for a while. Thanks so much to the YALC team who work so hard and who created a truly lovely experience! I hope to see you again next year, YALC!
Posted by Cicely at 20:10