So, if you are a person who uses the internet to talk about books, then you probably know that this past weekend was YALC, the first ever Young Adult Literature Convention. And it was pretty great. And it was also part of London Film and Comic Con, so I got to do some celebrity spotting, too, which is always fun!

Although there were parts that could definitely be improved, for a first time thing I think that YALC was really well run and curated with interesting and varied panels and a big variety of authors. I think that it definitely has potential to become a thing all it's own as the interest is definitely there! 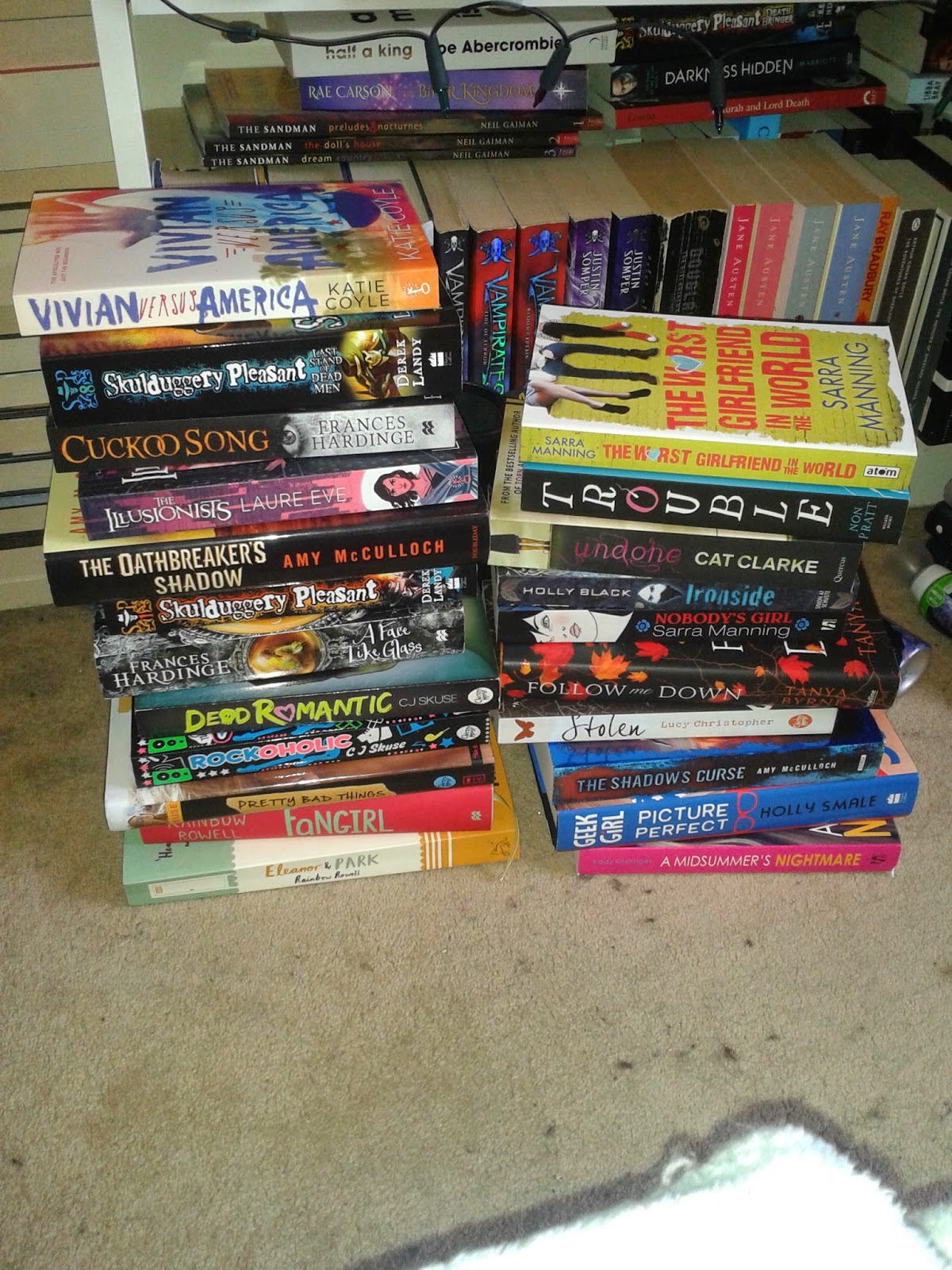 Because I am an idiot, I have about three pictures from the whole weekend and none of them are any good, so this won't be very interesting for you if you wanted to see lots of nice, pretty pictures (next time, if there is a next time (there NEEDS to be a next time) I will take more pictures, promise!) but I thought I should have at least one picture here, so there's all the books that I acquired/got signed over the weekend. I won't give a complete rundown of my time there because a) that would take ages and b) my memory is not that good and I didn't take notes, but I will just throw out some personal highlights.

On Saturday, I got to catch up with lots of bloggers and talk to them for a bit which is always the best, and I also got to meet RAINBOW ROWELL. NO BIG DEAL. We queued up for ages after her panel, Superfans (Andy Robb, Tim O'Rourke and Lucy Saxon - whose Cap America cosplay was amazing - were also on the panel and it was so good! Very entertaining.) to meet her and to get our books signed, and it was so worth it. She was so lovely even though she had a shit ton of people to get through, and I got the special edition HB of Fangirl which I just like to look at and touch a lot because it's so pretty. I was also equally excited about meeting Derek Landy, author of the Skulduggery Pleasant books. Thanks to Cait, I started reading the Skulduggery books in November and I LOVE THEM SO MUCH. Even though he'd been signing for hours already that day, he was so friendly and funny and I got to meet two of my favourite authors in one day which was amazing. I'm genuinely surprised my brain could handle that much excitement in about a four hour period. Bella and I also stopped Malorie Blackman so that Bella could get her book signed and we told her how great YALC was and thanked her and she was so kind and lovely and it was all so lovely. Sorry, I'm still kind of reeling from how great this weekend was.

Sunday was just as great as Saturday, if not just because it was less busy and they actually put the aircon on in Earl's Court so we didn't all melt and die from the heat and dehydration. I went to two panels that day - I'm Too Sexy For This Book, which was as funny as it sounds as well as providing food for thought about sex in YA (it gave me thinky thoughts that I might put into a blog post if I can be bothered/if they make any sense!), and Sisters Doing it For Themselves, an all female panel (WOOP) about heroines and girls in YA fiction. I really enjoyed both of them, though I do think next year they should try and create a space for panels where you can actually hear what's going on without the background noise from the rest of the con. Again, I got to talk to bloggers and authors who I hadn't seen/didn't have the chance to talk to on Saturday, which was so great! Honestly, I think one of the things that makes events like these so great are the people. It's all well and good getting to meet favourite authors and seeing panels, but it's the getting to talk to people who are like you and just feel safe and happy and like you are with your kin that makes these places so great. I would not enjoy blogging any where near as much if I didn't have these people to share it with (though I think Lucy expresses this sentiment way more eloquently than I do in her post here).

Basically, despite the heat and the crowds and the exhaustion and the aching shoulders (my god, the aching shoulders. Who knew carrying around a pile of books around all weekend would do that much damage), I had the best time at YALC. I so hope that this becomes an actual thing because it was just such a fun experience. I feel rejuvenated, even though I'm so tired right now. It's made me love reading even more, and I'm so excited about all the books I have to read. It's made me feel like part of a massive and great community that I love being a part of, and it's made me want to make more friends and just enjoy being a part of this community more than I already do. Basically, it was wonderful, and I want to thank Malorie Blackman and Katherine Woodfine and Booktrust and all the publicists and publishers and authors involved in making this great thing. So, thank you!
Posted by Cicely at 16:01